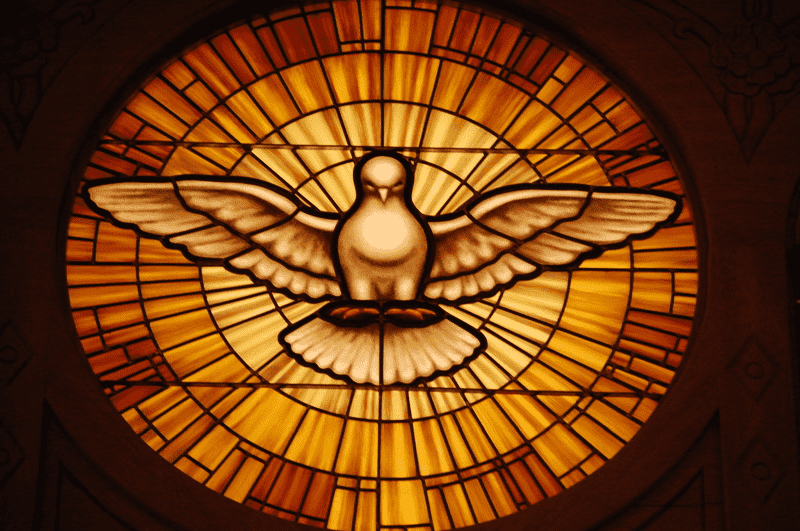 The " (Holy) Spirit" or (Holy) Ghost, the real name is not those names!

You are following false idols!

(Holy): In practically all languages, the word "(Holy)" has been derived from the divinely honored sun. According to Encyclopedia of Religions, HOLI is the Great Hindu spring festival, held in honor of Krishna, as the spring sun-god. Strong's Concordance refers to "heile" (the sun's rays). This form is almost identical to the German and Dutch equivalent of the English "(Holy)." The German and Dutch word is heilig, derived from Heil, the name of a Saxon idol.

The correct term is Qadosh

In Paleo Hebrew it is Qadash

You see scripturally; there are "familiar spirits." A familiar spirit is a demon that is summoned by a medium with the intention that the spirit asked will obey his or her commands. Many believe that the (Holy) Spirit or (Holy) Ghost helps you. Well, the REAL name is not that!

The Greek word 'pneuma' by today's English standards should read the spirit, as well as the Hebrew word 'ruwach' found in the original Hebrew version of Mathew, and It also means spirit, not Ghost, which is "the soul of man; a disembodied spirit." Our Heavenly Father certainly cannot be a Ghost; He never had a body from which to be disembodied. I can't speak for the King James per-Version crowd, who say that he is dead by referring to Him as a Ghost, but He is very much alive. Before His birth in the King James per-Version Yasha, the Mashi'aH, certainly was not a Ghost that word is not in the text. At which time he did not have a body and to say that it was His Ghost would say that He had died previously, before comming in the flesh and that His ressurection was not His first.

This scripture uses Rawach Qadash rather then Qadash (Holy) Ghost or Qadash (Holy) Spirit. Rawach Qadash comes straight from the Paleo Hebrew. The scriptures were altered in two ways, "familiar spirit" in the King James Bible translates into English from the single Hebrew word obe אֹוב, and the question is why?

breath, the wind of heaven. Part of Speech: feminine noun.

Note: There was no letter "U" in the Paleo Hebrew alphabet, but an "A" is an Aleph in Hebrew.

H6942 קָדַשׁ Qadash: to be set apart or consecrated. You are not to offend the Ruach Hakodesh (or Rawach Qadash in the Ancient Phoenician Paleo Hebrew).