Lord in the Bible is a pagan term and stands for Baal.

H1167 Baal; a master; hence a husband, Lord* (which is why this Bible scriptures has removed Lord)

The title "lord" is applied to all heathen deities, if the word "god" is not used for them. In most cases "lord" and "god" are used interchangeably for pagan idols.

There was an Etruscan house deity whose name was Lar, which signified "Lord." It was also known as Larth, who later on became very popular in Rome and became known as Lares (plural) because as idol statues they were usually in pairs. The Greek equivalent of this name was Heros, which was another name for Zeus. A feminine form was known as Lara, who was the beloved of the god Mercury.

Lar and Larth mean Lord. The letters "th" and "d" were virtually interchangeably used, in various nations. It was also common to find "o" and "a" interchangeably used in Old and Middle English. The word "Lord" can also be traced back to Loride, a surname for the Teutonic god Thor, and to Lordo, another deity.

Ahâyâh wants to be called Ishi, rather then Baal or “Lord”, or “My Master” (Hosea 2:16). That is why “Lord” has been removed from these scriptures. Ishi means “My Husband” and the “Old Testament” uses “My Husband” instead of My Master when reffering to Ahâyâh. 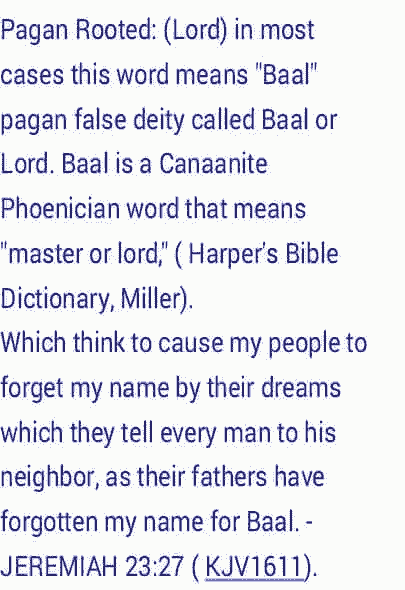