Yashaya is the name of the Savior! Not JESUS!

The whole world is deceived! Revelation 12:9

There are thousands and thousands of pagan idols, which has been cleaned up in these scriptures, over twenty uncovered Satanic terms see Ahayah.com for a full list of them. The Father and the Son don't want you saying other Gods!

Exodus 23:13 And in all things that I have said unto you be circumspect: and make no mention of the name of other gods, neither let it be heard out of thy mouth.

As one example, most Bibles have Amen, from the Egyptian Amen Ra as well as countless other hidden terms we have uncovered and cleaned up! Our Saviour Yâsha' calls Himself "the Amein" in Revelation 3:14 One might ask: Have we been misled to invoke the name of the Egyptian sun-deity at the end of our prayers?

In any event people are calling out Pagan idol terms for the Creator and the Son on a daily basis!

This is effecting your prayer, your salvation (as you want to accept the REAL creator and Son).

Its no wonder that your prayers go unanswered!

The Codex Sinaiticus from the 4th century to be one of the best Greek texts of the New Testament, does NOT have Jesus, but instead has Yasha for the SON's name. 21 other Papyrus fragments dated to 150AD confirm this fact that the Messiah is Yasha! The Yasha Ahayah Bible Scriptures uses the King James text, cleaning up many other Pagan terms in the scriptures.

$5 PDF of Truth in many languages!

Neither is the term "GOD" free from heathen trappings. Paul wrote that there are "gods many and lords many" (1 Corinthians 8:5 KJV). One root of "god" means "to pour as in a molten image" (Oxford English Dictionary). No wonder idols are known as Gods. In the Book of Enoch 69:6, Satan's name is revealed as "Gadreel" and the short of that name would be "Gad" ... the letter "A," in Aramaic/Hebrew, is always pronounced "ahh" - so "Gad" is pronounced "God." See what's been going on? Satan is awfully crafty, isn't he! Gad is a Syrian or Canaanite deity of good luck or fortune. In Hebrew, it is written GD, but with Massoretic vowel-pointing, it gives us "Gad." Other Scriptural references to a similar deity, also written GD, have a vowel-pointing giving us "Gawd" or "God." Gad is identified with Jupiter, the Sky-deity or the Sun-deity.

December 25th Christmas is the birth date of Tammuz,

It is a murder weapon, and we shouldn't be using it. It is a Pagan idol. 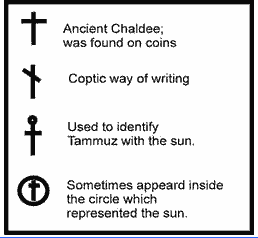 2 Timothy 4:13 (YASAT) The cloke that I left at Troas with Carpus, when thou comest, bring with thee, and the books, but especially the parchments.

New in the second edition of the Yasha Ahayah Bible Scriptures.

The Yâsha' Ahâyâh Bible Scriptures Aleph Tav (YASAT) coming out of Babylon is an english version following the Antioch (Protestant) WORD of the 1769 King James Bible (KJV), the Textus Receptus, Peshitta and the Jewish Aleppo Codex, however this rendition restores the Sacred name Ahâyâh throughout as well as key descriptive words to provide the reader with a truer meaning of the text.

Since Koine Greek had no linguistic equivalent to the letter ש shin [sh], it was replaced with σ sigma [s], and a masculine singular ending [-s] was added in the nominative case to allow the name to be logically inflected.

Iota is the ninth letter of the Greek alphabet. It was derived from the Phoenician letter Yodh.

That is “Ya” in ancient Hebrew Alphabet

That is a “Sha” in ancient Hebrew Alphabet.

Imagine, the name of the Messiah is right there in the Codex Sinaiticus and earlier Papyrus manuscripts! Now the Yasha Ahayah Bible Scriptures restores the name Yasha throughout.

$5 PDF of Truth in many languages!

Enter Email Address to log into the 𐤀𐤄𐤉𐤄 A’HâYâH Community